On Friday 8 December, almost two weeks since Queenslanders went to the polls, the Electoral Commission of Queensland declared election results in all seats, paving the way for Premier Annastacia Palaszczuk to claim victory for the Labor Party. Following the declaration of seats, the Governor His Excellency the Hon Paul de Jersey AC received Ms Palaszczuk and invited her to form government. 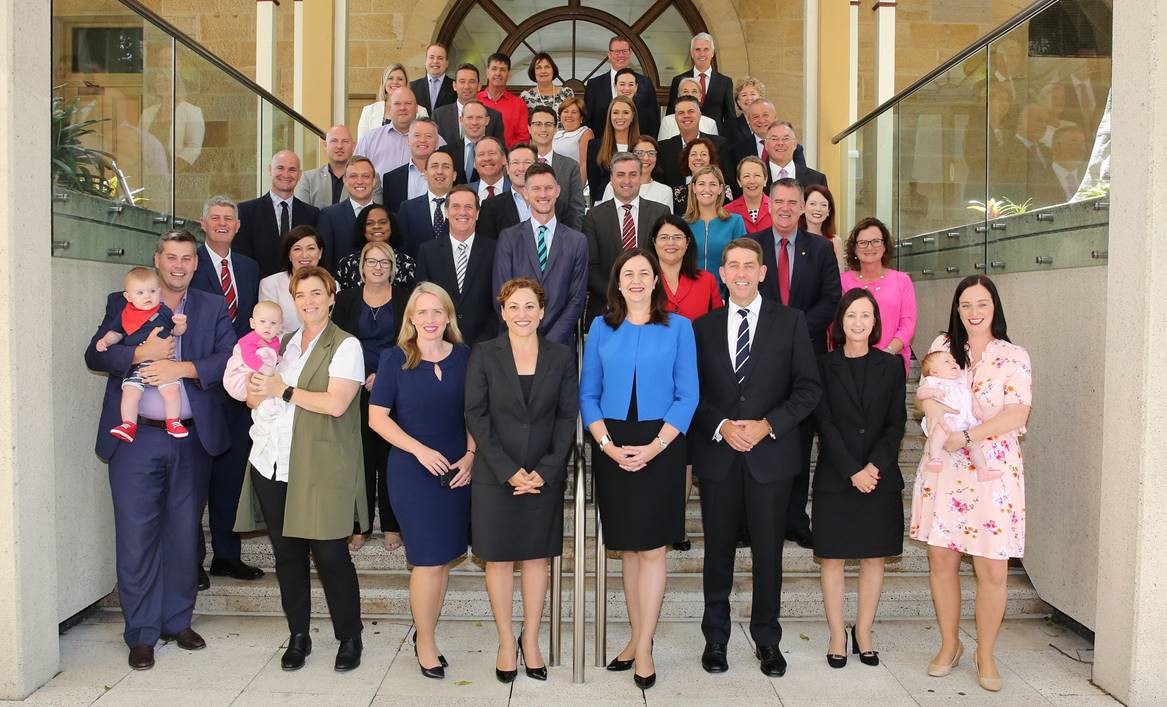 On becoming premier in 2015, Ms Palaszczuk was the first woman in Australia to enter that role from Opposition. Ms Palaszczuk has once again made history as the first woman to be re-elected premier for a second term. Speaking to reporters, Ms Palaszczuk thanked voters in her electorate of Inala for re-electing her and made special mention of Queenslanders who voted Labor for the first time, saying “To them, I recommit my Government to the key priorities of jobs, health and education”.

LNP Leader Tim Nicholls has conceded defeat and announced his intention to step down as party leader, with a new leadership team to be elected by the LNP party room today.

Composition of the Parliament (93 seats in total)
The election outcome, which has been officially declared by the Electoral Commission of Queensland, is as follows:

The result gives Labor a two-seat majority in the 56th Parliament.
Labor Ministry
Expanding from 17 to 18 positions, the new cabinet will be officially sworn in this morning. Former Treasurer Curtis Pitt will be nominated by the Government to take up the position of Speaker in the Parliament, allowing Deputy Premier Jackie Trad to take on the important Treasury portfolio and creating room to elevate two of the Government’s strongest performers in Cameron Dick and Kate Jones. Dick moves to the State Development and Infrastructure portfolios, while Steven Miles steps up as Minister for Health and Ambulance Services, leaving his former Environment portfolio. Kate Jones adds Innovation to her Tourism and Commonwealth Games responsibilities.

Premier Palaszczuk – who was the Arts Minister in the last term – takes on the Trade portfolio, and will chair the Cabinet Budget Review Committee. Taking over the role of Leader of the House, Yvette D’Ath will be responsible for overseeing the organisation of government business and tactics in the Parliament. Second term MPs Di Farmer and Craig Crawford will also enter the Cabinet for the first time. Grace Grace adds Education to her Industrial Relations responsibilities, while Anthony Lynham has picked up the Energy portfolio from Mark Bailey, who continues in the Main Roads portfolio and adds Transport to his list of responsibilities.

LNP Opposition
The LNP will hold a party room meeting to elect their new leadership team at 2pm today. Current LNP deputy Deb Frecklington has announced her intention to run for leader, with Tim Mander as her deputy. Former party leader John-Paul Langbroek and Oodgeroo MP Mark Robinson have also announced their intention to run for the position of party leader. Whitsunday MP Jason Costigan has announced he will be contesting the deputy role.

The LNP must navigate this term in opposition without the experience of key figures in their Shadow Ministry, after losing Scott Emerson (Treasury), Ian Walker (Attorney-General), Tracy Davis (Education), Tarnya Smith (Science and Innovation) and Andrew Cripps (Natural Resources and Mines).

The Cabinet will be supported by five Assistant Ministers; they are: