As the 2017 Queensland election campaign enters its second week, a number of big decisions and announcements have been made. We bring you all the news from the campaign trail.

Premier Annastacia Palaszczuk has been reported announcing that a Government she leads will not support a loan from the Federal Government’s Northern Australia Infrastructure Facility (NAIF), for Adani’s Carmichael Mine project.  This announcement was made in response to rumours about conflict of interest allegations regarding her partner. NAIF rules require any application to the fund to be supported by the State Government.

In an exclusive with the Townsville Bulletin, Treasurer Curtis Pitt has said that the Government will not veto all NAIF applications.

Opposition Leader Tim Nicholls has continued to refuse to rule out a preference deal with Pauline Hanson’s One Nation (PHON), saying he will only consider preferences on a ‘seat-by-seat’ basis. He has, however, ruled out a coalition-style agreement including Cabinet positions for the PHON party.

Premier Palaszczuk spent almost the entire first week of the campaign in North and Central Queensland, focusing on the regions. Over the course of the week the Premier visited Townsville (twice), Cairns, Airlie Beach, Proserpine, Rockhampton, Bundaberg, and Toowoomba, spending only one or two days in South East Queensland.

The Opposition Leader’s campaign was the reverse, with only one or two days outside of South East Queensland (in Townsville), with the remainder of his time spent making announcements on the Gold Coast, in Brisbane and on the Sunshine Coast. He also spent a day in the LNP-held seat of Lockyer, which came under threat from Pauline Hanson at the 2015 election.

Senator Hanson left Australia for India on Friday 27 October as part of a Federal Parliamentary delegation and returned on Sunday 5 November. Upon her return, Senator Hanson has quickly agreed her first preference deal – swapping first preferences between PHON and Katter’s Australian Party (KAP) candidates.  PHON leader Steve Dickson has spent the majority of his time in his own electorate of Buderim. Senator Hanson and Mr Dickson will now embark on a tour from Brisbane to Townsville, travelling in PHON’s ‘Battler Bus’.

According to a Galaxy Poll on 1-2 November, PHON’s support has surged to 18 per cent, recording 3 per cent above its August result. Labor’s support is stable at 35 per cent, while the LNP’s primary vote has fallen 4 per cent over three months, from 36 per cent to 32 per cent.

Another Galaxy poll shows that voters are becoming increasingly concerned at the prospect of PHON holding the balance of power following the 25 November election, with 53 per cent of those surveyed saying this scenario would be ‘bad’ and 36 per cent seeing it as a ‘good’ outcome. The last time this question was asked in February, only 49 per cent said PHON holding the balance of power would be a bad outcome.

A number of major announcements have been made in the first week of the campaign. Returning to familiar ground from the 2015 election campaign, Labor’s first election commitment was for an additional 3,500 nurses and midwives. To address traffic congestion on the Gold Coast, the ALP has committed to major upgrades of the M1 motorway and committed to “six or more lanes from Brisbane to the Border”.  Labor has also committed $1 billion for the Bruce Highway, benefiting critical Central and North Queensland seats.

On day two of the campaign, the LNP released its economic plan, promising to generate 500,000 new jobs for Queenslanders, streamlining approvals for major projects and increasing the threshold at which businesses are required to pay payroll tax. The LNP has also announced a plan to reduce Queenslanders’ electricity bills by $160 per year for the next two years. Underpinning the plan is a commitment to create competition between electricity generators and to do away with renewable energy subsidies.

The LNP has also announced a part duplication of the Pacific Motorway (part of the M1), aimed at reducing congestion on Queensland’s busiest freeway. The LNP has pledged $250 million – with the Federal Government expected to match this funding – for the four-lane alternative arterial route that will run for around 36km between Nerang-Broadbeach Road and Stapylton-Jacobs Creek Rd.

The Opposition has committed $60 million toward 10 projects aimed at encouraging growth in the State’s livestock and agricultural industries, as well as a new $1.3 billion program of dam building and water infrastructure.

The Battlegrounds
Townsville Region
The Premier and Opposition Leader both made it a priority to visit Townsville in North Queensland during the first week of the campaign, highlighting the importance of this region in forming the next government. PHON is expected to have a strong showing in the region, creating three-way contests with the two major parties. The seats in focus are:

To help you follow the key marginal seats and battlegrounds, Antony Green’s full electoral pendulum, showing projected margins following the 2017 electoral redistribution, is set out below. 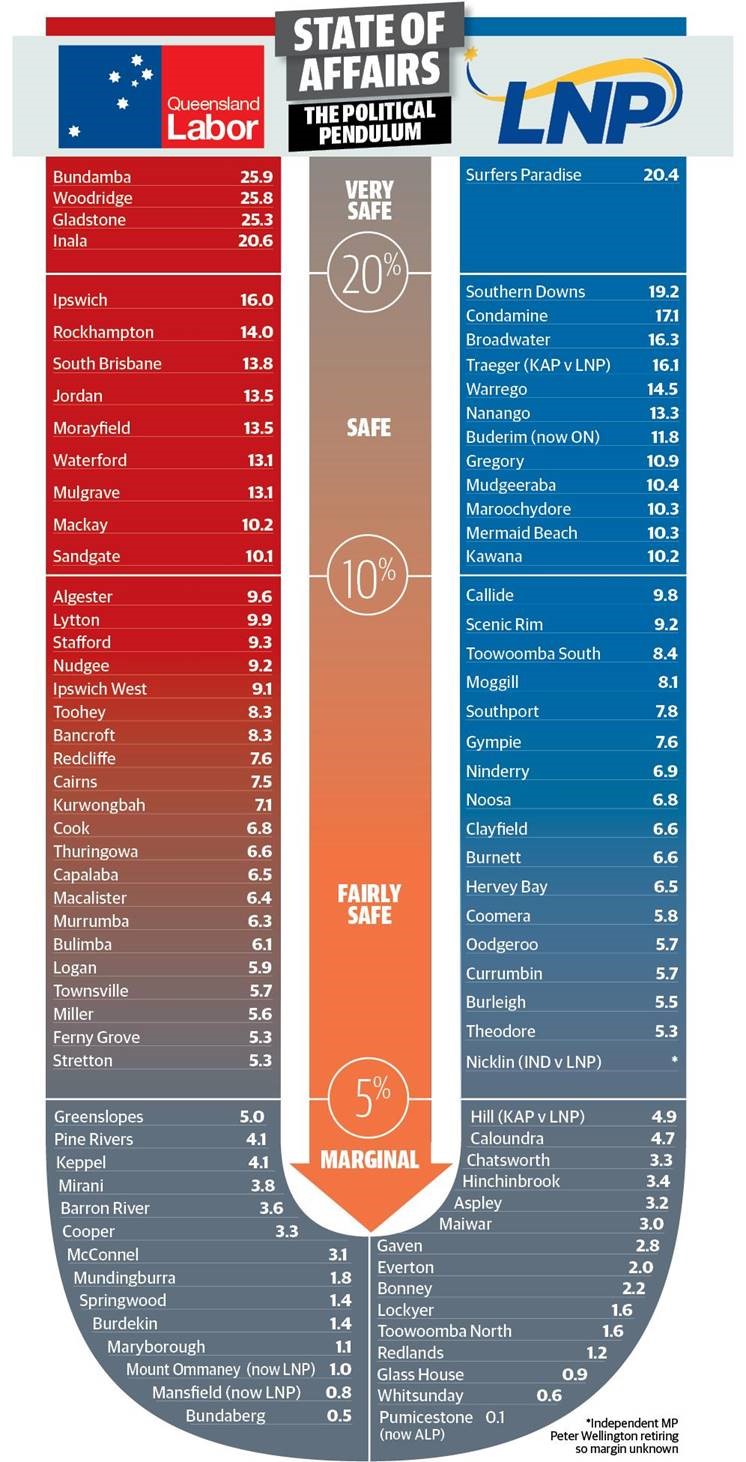