8 December 2017
The Federal Government entered the final parliamentary sitting week for the year buoyed by a bump in the polls and triumphant over Barnaby Joyce’s resounding victory in the New England by-election at the weekend. Recording what is believed to be one of the biggest ever swings to a candidate in Australian political history, Mr Joyce returned to Canberra to be sworn in as Deputy Prime Minister and resumed his portfolio duties as Minister for Agriculture and Water Resources. Meanwhile, Victorian senator Bridget McKenzie has been elected Deputy Leader of the Nationals, replacing Fiona Nash. The Government gained ground in this week’s Newspoll but continues to trail Labor, 53 to 47 per cent on a two-party preferred basis, while Prime Minister Malcolm Turnbull also experienced a boost in the preferred PM stakes, leading Opposition Leader Bill Shortenon 39 per cent to 33 per cent. In another victory for the Government, same-sex marriage passed the Parliament on Thursday afternoon, following a lengthy debate.

The Prime Minister has renewed calls for Labor senator Sam Dastyari to quit Parliament, alleging he put the security of the nation at risk in his dealings with a foreign political donor. Amid the debate, the Government has announced a package of legislative reforms to address “unprecedented” foreign interference and espionage in Australia. In a joint statement with Attorney-General George Brandis and Acting Special Minister of State Mathias Cormann, Prime Minister Malcolm Turnbull stated that political interference by foreign entities is a growing threat to national security and commercial interests, and that Australia’s existing espionage laws are inadequate. On Thursday, the Attorney-General moved to refer Senator Dastyari to the Senate Privileges Committee to investigate whether he has breached the rules governing MPs’ conduct.

After 55 hours of debate across both houses of Parliament, same-sex marriage legislation has passed the House of Representatives this week with a resounding vote in favour of change. With only four MPs voting against the legislation, no formal count of the final vote was required, and all proposed amendments were rejected. The Prime Ministerdeclared the day a “huge success” and a “day of joy”; Opposition Leader Bill Shorten reflected that the new law “will speak for a modern Australia, inclusive and fair”. Attorney-General George Brandis has confirmed that the law will define marriage as a “union of two people to the exclusion of all others, voluntarily entered into for life”; Australia becomes the 26th country to legalise same-sex unions. Both Treasurer Scott Morrison and former PM Tony Abbott were among the few MPs who chose to abstain from the final vote. See the media coverage here.

Results of the recent federal MP citizenship audit have been announced this week, revealing a number of doubts over parliamentarians’ eligibility to sit in Parliament. Labor senator Katy Gallagher has referred herself to the High Court after it was revealed she may have been ineligible to serve at the time of her nomination in 2016. Labor backbencher David Feeney has likewise been referred, while the citizenship status of a further eight MPs has been called into question – outlined in the table below. Labor and the crossbench voted to refer all eight MPs to the High Court, but the motion was opposed by the Coalition, leaving their status in doubt for the present time. See the media coverage here. 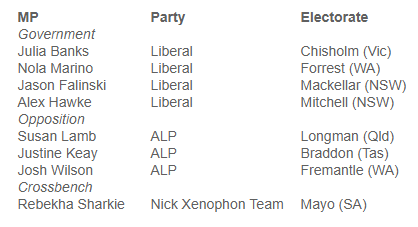 The result of the Queensland Election is expected to be formally announced today, almost two weeks after voters went to the polls. Opposition Leader Tim Nicholls has this morning conceded defeat and announced his intention to step down as party leader via social media, paving the way for Labor to declare victory. The Electoral Commission of Queensland has declared the results in 87 of 93 seats, giving Labor 45 seats compared to the LNP’s 37; 47 seats are required for a majority, with Labor expected to secure a total of 48. Greens candidate Michael Berkman has claimed victory in the new inner-west electorate of Maiwar, giving the party their first seat in the Queensland Parliament. See the media coverage here.

The Victorian Parliament will sit next week.